We took our son to the Tinchurin Theater on January 4, to see a perfomance of the company’s children’s production for New Year’s — Shurale Online (Шүрәлә Online). Many theaters in Russia have daily children’s performances from the end of December to after Orthodox Christmas and the end of the school holiday, around January 11. 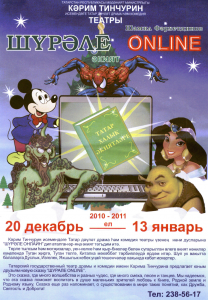 The premise of the play is simple– three characters from the folk tales of Tuqay — Su Anasi (Су Анасы), Kamir Batir (Камыр Батыр), Shurale (Шүрәле) — and apparently Baba Yaga (Баба Яга), the witch of Russian folk tales, are sent a package by certain Doc. Vir. The package contains a laptop, and the characters’ curious tapping on its keys summons the black-hat-wearing Doctor Virus, in a puff of smoke. Not only is his name written in Latin letters, but the Doctor starts out speaking English, then has Shurale switch his language into French, German, something evidently intended to be Chinese, and eventually into Tatar.

As it turns out, the ominous Doctor Virus wants to take the treasure trove (хәзинә) of Tatar folk tales, represented as a richly bound book kept in a chest that is lowered onto the stage. Before the arrival of the laptop and Doctor within it, Shurale summons the chest and opens it with a special key, and the characters argue some over what story to read from this national treasure.

After Doctor Virus’s arrival, others of the Tatar characters find the laptop and accidentally summon Shrek. As with Doctor Virus, Shrek starts out speaking English, then tries other languages before settling on Tatar. The Tatar characters have trouble pronouncing his name, settling on a two-syllable rendition that ends up being similar to “шәрык”, one of the Tatar (from Persian) words for East, and now the name of the most visible Tatar youth national renewal group, Шәрык клубы. Shrek is soon joined by Jasmine from Disney’s Aladdin and Spiderman. Jasmine is called Җасминә and Spiderman is Бабай.

As the representatives of these two worlds meet, we see interesting pairings: Jasmine and Su Anasi are dressed very similarly and come off as slightly jealous yet compatible versions of a single seductive female image; Shrek openly flirts with Su Anasi; Kamir Batir proves himself much stronger than Spiderman or Shrek; Spiderman compares his spinning ability with Baba Yaga’s ability to knit.

In the climactic fight scene, Doctor Virus forces his fellow computer-bound (and thus infected) characters to face off against the Tatar heroes, and they nearly defeat the Tatar characters, but then all turn against Doctor Virus, who is deleted, allowing the character to return as a disinfected Clown, no longer a virus.

In the finale, the modern, Western characters join the traditional Tatar characters in placing both the notebook and the volume of Tatar folk tales into the treasure chest and sending it off into the rafters above. The tension between traditional and new is resolved by this fairly direct statement that yes, these traditions are compatible, and they can be equally valued.

This entry was posted in Performances and tagged Tatar, Theater. Bookmark the permalink.